When companies like Exxon-Mobil and McDonalds think “green”, they’re thinking of cash, not the earth. And after all, what matters to unscrupulous marketers isn’t so much the reality of their brand or product, but how the public perceives it – which often results in greenwashing so absurd, it’s almost funny. These 15 examples of extreme greenwashing range from woefully ignorant to downright malicious. 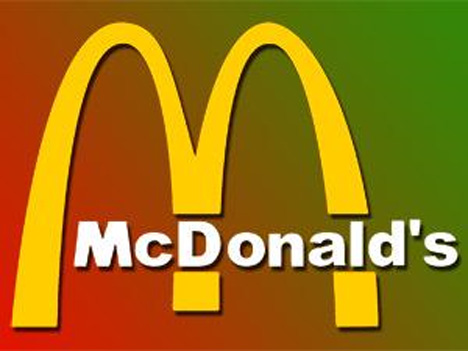 McDonalds wants everyone to know they’re going green…ish. The fast food monster is swapping the red in their logo for green in an effort to convince Europeans that they care about the environment. To be fair, the company has made some important strides – like using environmentally-friendly refrigeration and converting used oil to biodiesel – but this is still fast food relying on distinctly un-green factory farms for their supplies, to say the least.

As GreenBiz.com put it, “This strategy is essentially the textbook definition of greenwashing: Promoting green in the abstract, literally re-painting your signage with the color green, while simultaneously making sparse, vague claims about environmental action.”

Recipe for a whale of a fail: Take one Hummer, the most environmentally unfriendly personal vehicle known to man. Plaster it with images of glistening green leaves and phrases like ‘EcoSmart’, which just happens to be the name of your company. Watch your company lose credibility instantaneously, and become an internet laughingstock among the very people you were hoping would become your customers.

Even if this particular behemoth were somehow greener than your typical Hummer, that wouldn’t mean much – but would still be more forgivable than using one of these vehicles to advertise an “eco-smart” company.

“Even Our Store Bags are Disposable!”

(image via: The Good Human)

When this New Mexico pet shop decided to “go green”, they apparently didn’t bother finding out what that actually means – hence, their proud declaration that “even our store bags are disposable!” Though the people responsible for the ad probably didn’t mean to deceive anyone, ignorance can be just as bad – it’s seriously confusing for consumers who are already not too clear on what makes a product green.

Cover the Earth with Toxic Paint

Want some tips on how to greenwash? Ask Sherwin-Williams. They’ve built an entire marketing campaign around a supposedly green line of paint which, according to Inhabitat, isn’t actually all that green – all while plastering billboards with their head-scratching logo that seems to advocate covering the entire world in toxic Sherwin-Williams paint.

Wait a minute, is that a Fox News logo being hugged by a commie recycling symbol? Indeed, the undeniably conservative news network seemed to completely forget who their audience is with their “How Green” website, an apparent attempt to maintain that “fair and balanced” illusion.

The site was about as authentic as a backdrop on a middle school theater set, with uninspired articles and a sloppy design. It became pretty clear that Fox News’ heart wasn’t exactly into it when the site went without updates for months on end, prompting Ecorazzi to liken it to “a zombie that won’t die”. The website was finally taken down in Fall 2009.

CO2 is Actually Good for the Earth

“There is no scientific evidence that CO2 is a pollutant.” So proclaims an ad called “CO2 is Green”, which backed up this dubious claim with statements like “higher CO2 levels than we have today would actually help the Earth’s ecosystems.” It may just be the most ridiculous example of greenwashed propaganda yet, and who else could possibly be responsible but oil & coal interests.

The ad was generated by a veteran oil industry executive and a Houston-based owner of coal resources as part of a campaign to undermine the EPA’s ruling that CO2 should be classified as a pollutant. It didn’t work, of course.

Buy Local at Your Neighborhood Citgo 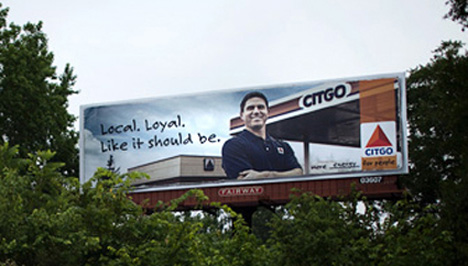 When you dedicate yourself to spending more of your hard-earned dollars at local businesses, the first place you think of is naturally your neighborhood Citgo. That is, if you live in Venezuela. But being an international oil giant didn’t stop Citgo from putting up billboards in towns all over America – including this one spotted in Durham, North Carolina – that say “Local. Loyal. Like it should be.”

They’re plastic wrapped in more plastic, and send the message to little girls that they should be plastic, too. But that didn’t stop Mattel from trying to market Barbies as “green”, with a line of accessories made from repurposed excess fabrics and trimmings left over from other Barbie products (and assembled in China using what amounts to slave labor).

“Barbie BCause is for eco-conscious girls who believe that being environmentally-friendly is the right thing to do,” said Mattel in the press release accompanying the “Barbie™ Bcause” line of products. Right. Because glamorizing constant consumption of non-recyclable products is so eco.

‘Sustainable’ Iceberg Lodge… In the Desert

What could be more sustainable than placing a gigantic luxury hotel hewn from ice into the ocean in the arid desert climate of Dubai? German design duo Frank and Sven Sauer envision the Blue Crystal as a year-round ice lodge that will require massive amounts of energy to keep it frozen – energy that, according to the architects, will come from renewable sources.

Even if the Blue Crystal managed to power itself with solar energy, using so much energy for such a ridiculous purpose stretches the meaning of the world ‘sustainability’ to its breaking point.

(image via: The Good Human)

Disposable diapers are a huge tax on the environment, adding some 3.5 million tons of waste to America’s landfills every year. And, concerned parents are all too aware of the chemicals they contain, including carcinogens like dioxin. So, when Huggies debuted their “Pure & Natural” line of diapers, perhaps some parents thought they were actually – well – pure and natural.

Not so much. The difference between regular Huggies and the greenwashed version is a small piece of organic cotton that doesn’t even come into contact with baby’s skin – it’s on the outside of the diaper. Talk about capitalizing on a technicality.

In the midst of begging the government for financial assistance, Detroit’s ‘Big 3’ auto executives – Alan Mulally of Ford, Rick Wagoner of GM and Robert Nardelli of Chrysler were ridiculed for flying to Washington D.C. on mega-expensive, climate-killing private jets. So how did they respond to the criticism? By driving their companies’ respective hybrids to Washington after they were called out for the hypocrisy. Apparently, driving a hybrid once totally erases all of your environmental (and financial) sins.

Exxon-Mobil, Green Company of the Year

Exxon-Mobil doesn’t exactly have a stellar reputation for caring about the environment. In fact, the oil giant has been called the ultimate anti-green company, as much for its own outrageous environmental offenses as for its efforts to undermine climate change action. But that didn’t stop Forbes Magazine from naming Exxon-Mobil “Green Company of the Year” in 2009.

Forbes claims that recent efforts by the company – including investment in renewable energy and natural gas – is enough to merit the title. But the magazine is left holding a giant green paintbrush in the face of decades’ worth of evidence to the contrary. Steve Forbes, billionaire head honcho of the magazine, probably doesn’t mind, though – he’s a well-known climate change skeptic.

For more information head to www.webecoist.com